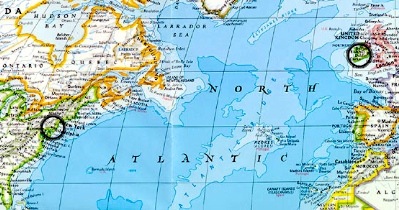 James M. Liggett was 20 years old when he left this life in Ireland behind with his two brothers. The trip across the Atlantic Ocean to Philadelphia may have been as long as 10 weeks. This was a popular port for Scotch-Irish immigrants and the state is still home to many Liggetts. Perhaps James made contact with the Liggetts who came to Pennsylvania in 1734. They were from Perthshire, Scotland by way of County Armagh, and settled in York County, Pennsylvania. John Ligget, a blacksmith, lived in and owned land in Windsor Township. John and his brother, George, owned adjoining tracts of land. Border Settlers of N.W. Virginia, describes a George Legit and other men being killed in 1791 by a band of Indians led by Tecumseh along the Ohio River, “George Legit was pursued for nearly two miles, overtaken and killed.”

A descendant of these early Pennsylvania Liggetts, Manley, migrated to the same area of Nebraska as James eventually would, living in the town of York, until his death in 1912. His two sons had a lumber business there. Perhaps they knew or were even related to each other. There was also a place called Liggett Gap in Pennsylvania. The Scranton family, early entrepreneurs of the northeast Pennsylvania anthracite region, organized the Liggett’s Gap Railroad in 1849, between Scranton and a connection with Erie at Great Bend, Pennsylvania.

James Liggett and his two brothers “each went in a different direction after coming to America and never reunited.” (Other two may have gone to Ohio and Louisiana). After being in America for four years, James married Jane M. F. McCarty in Philadelphia at the 4th Presbyterian Church.

Jane was also from Ireland and four years younger than James. The year was 1836: James was 24 and Jane was 20. Liggett descendants recall being told they were from County Cork and so it is likely that Jane McCarty, which is a variation of MacCarthy, is the one from County Cork where the MacCarthy clan was involved in many of the major events of Ireland. 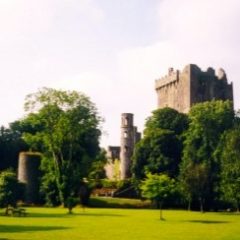 The McCarthy clan held a powerful position in Munster until the late 17th century, controlling a large amount of land and many castles, including Blarney and Ross Castles, until the British confiscated their land. Cormac Laidir MacCarthy built Blarney Castle (pictured) in 1446. By the late 1500s, Cormac McDermott MacCarthy had inherited the castle and showed considerable skill in maintaining his power against challenges from his clan, the Crown, and others. His flattery and persuasive conversation is reputed to have led Queen Elizabeth I to refer to him as being “all blarney”. The art of flattering conversation later became linked with a particular stone in Blarney Castle and gave rise to the belief that eloquence was conferred on those who kissed the stone. One of the main ports of exit from Ireland in the 1800s (and for the Titanic) was Cobh in County Cork.