Liggett migration from Scotland to Ireland has been traced to at least 1609 for the Plantation of Ulster Province. According to James Leyburn in his book about the Scotch-Irish, “much of Ulster had escheated to the English crown soon after the accession of James I; about eighteen percent of the area that now is the counties of Donegal, Londonderry, Tyrone, Fermanagh, Armagh, and Cavan, was taken from the native Irish proprietors and opened for colonization by the English and Scots in 1610.”

Liggett is also included in a list of surnames of “the Cromwellian Adventurers for Land in Ireland under the various acts and ordinances of subscription commencing with the Act of 17” by Charles I in 1642. 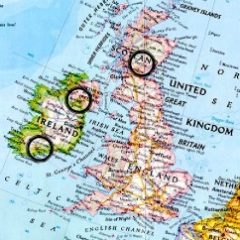 My ancestor, James M. Liggett, was born in County Armagh, Ireland, on March 12, 1812. Armagh is the ancient seat of the Kings of Ulster and where St. Patrick established his missionary headquarters in the middle of the 5th century to convert the Irish to Catholic Christianity. It is home to both the Roman Catholic and Church of Ireland (pictured below) Cathedrals. 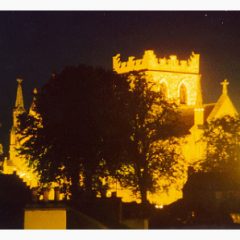 When first the mists of time parted, and the story of Ireland began to take shape in the tales of the tribal seanacaides, it was of the deeds of the heroes in and around Armagh they told. Ireland’s history was largely writ in Armagh, and the destiny of many nations was altered by the men who through the ages left the varied hills and plains of the County and City to carry their messages abroad. Today, there is not a parish, scarce a townland, in the county which does not bear some sign of days gone by. Flint man, bronze man, iron man, and steel man, each has left his trademark, and those who would peer into the history of Ulster or of Ireland must come to Armagh. The City today has an atmosphere all its own. Fine modern shops line the main streets, which bear names dating back fifteen hundred years, while side streets twist and curve up the steep hill to where the Cathedral of St. Patrick has stood since the day when the Saint made the City the Capital of his Church. For untold centuries before that, the ground was revered as holy by the pagan Irish. Armagh is the most beautiful inland town in Ireland; there is history in its every stone, but those who would go there should have some kindred spirit to accompany them, with whom to share the charm of the Ancient Citie. “I found in Armagh the splendid Meekness, wisdom and prudence blended Fasting as Christ hath recommended and noble councillors untranscended.” (Prince Aldfrid’s Itinerary through Ireland, written circa 684. He was afterwards King of the Northumbrian Saxons and one of the many Englishmen who studied at the ancient School of Armagh).

James M. Liggett was the son of Robert and Sarah Liggett. They were likely Protestant and lived in Tullyhugh, Tandragee, Pointzpass, Keady, Aughantaraghan, or Knockanarney which are all in the vicinity of Portadown in County Armagh. There are records from the Tandragee Parish Church that could be for James Liggett’s father, Robert: born to Sam Liggott of Tullyhugh, May 14, 1788; Robert Ligget born in 1743 and died Oct. 3, 1830: Robert Liggett, 71 years old, died Feb. 28, 1862. Kenneth George Liggett lives in Portadown today and has traced his Liggett family back to Robert Liggett’s generation in County Armagh: George Liggett was born in Breagh, Portadown, about 1772, and may be a brother of Robert. George married Abigal Saunders and they had five children during the same time period that my ancestor, James Liggett, was born, in the early 1800s. Kenny says the Liggett name was very common in the townlands surrounding Drumcree Parish and they were known for making their living as weavers through the 1800s. Weaving was a part of their way of life as they wove their own linen for their homes. A large room would have been attached to their house for the loom.

George Liggett’s son, George, remarried a widow, Mary Crossen, from th next parish of Tartaraghan in 1848 and had five children. Kenny is a descendant of their son, Joseph, born in 1854. Another of their children, William John, married Mary Cranston in 1871. Their daughter, Sarah Ann Liggett, is the grandmother of Jean Crawford, whose stories of Liggett life in Portadown are in Chapter 10. When the linen factories sprang up, many of the families moved into town to live near them. Kenny Liggett’s great-grandfather moved to Portadown in 1893 to work in Armstrong’s weaving mill. They settled in Bright Street in the Edenberry area. Kenny’s grandfather, also named George Liggett (just like my grandfather) was born there. Portadown, as described in 1939:

Once Port-ne-dun, the Port of the Fort, situated some 10 miles north-east of Armagh, on the main road to Belfast, is one of the most thriving industrial and market towns in Ulster, although in the heart of the fruit-growing country which has earned for County Armagh the title of “The garden of Ulster.” It is a great linen centre, and, by reason of its bridge over the River Bann, is the gateway through which traffic for western and south-western Ireland must pass. It is the railway junction for the main railway lines from Belfast, Dublin, Derry, Armagh, and the Midlands. Industrially, Portadown has many linen weaving and handkerchief factories, foundries, flour mills, and a cider factory, while its roses have a world-wide reputation. The Bann Basin with its bogs offers the sportsman fishing and shooting, while the 30 acre public park, with its pleasant river, is yearly growing in beauty as the gardener’s work develops the shrubberies and coppices through which its pleasant walks meander. A new bowling green and a pleasure garden have recently been laid out beside the centre of the town on the banks of the Bann while other amusements include football, fishing, golf and tennis, with numerous reading and recreation rooms. Close by was born “AE” – G. W. Russell – poet, painter, economist and a remarkable journalist. Another distinguished Portadown man was Sir Robert Hart, first Inspector General of the Imperial Customs in China, who has been described as “The most influential and most upright European the East has ever known.” By his straightforwardness he made British integrity respected in the Far East. A tablet has been erected by the Ulster Tourist Development Association, Ltd., in Woodhouse Street to commemorate this famous Ulsterman’s birthplace. Portadown is also the native place of Sir Robert Bredon, who succeeded his fellow-townsman and is almost equally famous. A fine new school erected by the Armagh Education Authority in Portadown is named the Sir Robert Hart Memorial P .E. School. From Portadown to Richhill, Kilmore, and Loughgall a network of roads runs through a district covered with fruit trees and bushes. You may drive through this garden by narrow lanes and broad roads, coloured and scented by the pink and white bloom of fruit trees, by schools and villages which are gardens in themselves. The centre of the district is Loughgall, a quaint old place more English than Irish in atmosphere. Its one long street runs into, a little valley and rises again, and, unlike the customary white of Ireland, most of its thatched cottages are coloured the pink of apple blossom. At Loughgall there are two planters’ bawns, and in the very pretty lake in the manor grounds is a crannoge, or island refuge. Permission can be obtained to go through the grounds. Between Portadown and Loughgall was fought the Battle of the Diamond, which resulted in the formation of the Orange Institution. The first meeting was held in Jackson’s house in Loughgall and the table at which the Constitution was drawn up can still be seen there.

James Liggett was one of an estimated half million Irish who immigrated to America between 1815 and 1845 after the lifting of Thomas Jefferson’s embargo of Great Britain and France in 1809. Leyburn also writes, “Ship owners, emigration agents, and well-to-do people in America who wanted indentured servants or settlers on their properties also stimulated the inclination to migration. More than one hundred thousand Scotch-Irish began their New World careers as servants. The contract was considered no different from the long-established practice of apprenticeship. It carried no stigma of slavery, but was considered both practical and respectable, and offered the chance to own land instead of holding on to a lease that might end in rack-renting. It also promised affluence and social prominence to those who were truly ambitious.”

After working as tenant farmers in the lowlands of Scotland, many of the Scotch-Irish hired Irish tenants to farm land leased to them by the English. In addition they founded linen and cotton spinning businesses, as well as, the Bushmills Distillery. They prospered in the new land, but after having their rent raised, being compelled to pay tithes to the Church of England (even though they were Presbyterian), and other English laws destroyed the woolen and linen industries, the Scotch-Irish began a steady stream of emigration to the New World, primarily to Pennsylvania. This continued through the 19th century.

Symbolic of the three birds on the Liggett Coat of Arms, James M. Liggett and two brothers left Ireland in 1832 for Pennsylvania to work in a factory as indentured weavers.