James Guinn (Jim) Liggett, like his father and grandfather, migrated from Nebraska to California, after completing his tour of duty in Alaska. He transferred to March Air Force Base in 1956 (in Riverside, where Grandfather Guinn lived in the 1940’s) to be near his father, George Harlan (Hal), in San Diego. With more plentiful rental housing, the family finally had in an indoor bathroom and two bedrooms at 4061 Ottawa St. in Riverside. He attended the University of California at night to get a teaching credential. Both of his children, Jacquie and Terri, started kindergarten and graduated from high school in Riverside, moving five times in between, including twice in the Sacramento area (Citrus Heights) before Jim and Rose divorced in 1966. Jim left the Air Force in 1965 to begin a new career teaching reading and writing skills to inmates at Folsom State Prison until 1983. He continued to teach for a few more years at an elementary school until his retirement. Like his father who was a 32nd degree Mason, Jim worked his way up the chairs to earn the highest rank in 1968 at the Oak Plains Lodge No. 789 in Sacramento, California. He remarried in 1966 to Joyce Albright, who was also a teacher. Rose remarried the same year, to Bill Williamson, an entrepreneur.

Jacquie graduated from San Diego State University with a degree in social welfare and married her husband, Ronald Joseph Proctor (second son of Alfred and Genevieve Proctor) a year later. After serving in the U.S. Army during the Viet Nam War and being based in Alaska, like his father-in-law, Ron graduated with a degree in Business Administration.

They moved to the San Francisco Bay Area where Jacquie completed a Masters Degree in Public Administration and they bought their first house with the G. I. bill. In 1980, they moved to the City of San Francisco where their son, the sixth generation descendant of James M. Liggett, Aaron James Proctor, was born. Ron earned an MBA from Golden Gate University and worked as an information systems specialist in human resources. Like her grandfather, Hal, Jacquie worked in city government. She is also active in the YMCA and other community groups. She founded a non-profit organization to preserve the highest point in San Francisco as public open space. Aaron graduated from Lowell High School, the oldest west of the Mississippi, and the University of California with a major in Design | Media Arts. 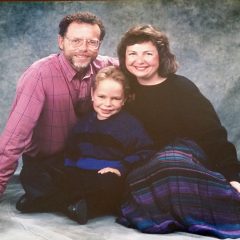